In the last couple weeks, my life has turned unrecognizable. A friend died. I went on a trip. I caught a virus. And then I caught pink eye. For three of the four, I missed a lot of work: I forced myself to go back and start getting caught up during the virus because I’d already missed so many days from emotional distress, and the trip.

The friend who passed and I weren’t on great terms. He’d dated a friend of mine and not treated her right, imho, and I was mad at him for that. But outside of that, we’d shared a circle of friends for a long while, and I had good memories of him alongside the bad ones. He was 33 and he had 2 heart attacks and he died, and it really, really wasn’t fair. And the thing I kept coming back to was that, we’re still so young, we babes in our thirties, and we deserve the chance to get to be mad at each other, and to make up. Young people are supposed to be allowed the grace to make mistakes and learn from them and become better. And that was what felt the worst about it. That for him, any mistakes he had made would be left that way. Now, he’d never get the chance to right those wrongs. And I’d never get the chance to not be in a fight with him any more.

He had been a writer, like me, like many of my readers here. His family read poems from his work, and I felt mortified on his behalf, because the last thing I’d want would be people going through my stuff like that: what if they read something sexual? or close-minded? or written badly? But they said funerals are for the living. And for that reason I’m glad there was something left behind to staunch the grief, to let his brother and sister feel close to him for a little while longer.

We attended the wake on a Monday evening, attended the funeral and procession and graveside service on a Tuesday. I called in Wednesday, too. I was upset to have lost a friend, sad not to have encountered more of the good in him as attendees tearfully spoke of his gentle kindness and his calm heart. But I was also upset by the existential dread that always comes with confronting death. We can’t stop it from happening, and we don’t know what, if anything, comes next. How utterly alien it is to look at a person’s body and know that that person isn’t in there. Where do we go, and what has it meant to have been alive? 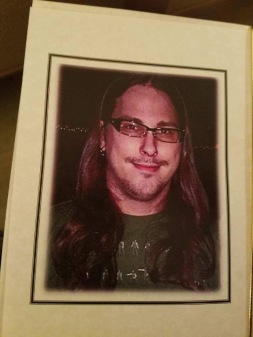 I messed up two of my different medication doses not once but twice, so my brain chemistry and hormones were way out of whack. I went to therapy. I told my boss I didn’t want people to see me this way, not at my best. He said they could use my help, and I figured he was just saying it to be nice.

But I went to work on Thursday, and I got a lot of work accomplished, and I felt useful and smart and capable. My boss knew that coming in and doing something I was good at would make me feel better about myself, and it did. By Friday morning I was ready to pack for our trip to Memphis, where the Beale St Music Fest was happening, and where we’d agreed to meet with an old friend driving from the opposite direction.

The hotel was nice (though maybe not as nice as we were paying for it), and Friday was the glorious relaxing day all vacations should include: do only your favorite stuff with only your favorite people. Walk around town, read, play cards, watch tv, nap. Friday was lovely in that it required nothing from me. As I told the partner who was with me, “It’s like being at home. Except someone else does all the chores.”

On Saturday my throat had started to bother me, but I didn’t know I was sick yet. We went to see the Kongos perform, and stayed for 45 minutes of their 60 minute set. Our friends didn’t know their music, and I’d started to feel bad. Walking back to the hotel felt much, much more difficult than it should have. By the time we arrived I was beset by stomach troubles and lots of feeling really bad. We got to hang out with our friends a little more later on, after I’d slept some, but I didn’t get to drink as I’d wanted to. Still, I was glad to have caught up and talked and listened and talked some more.

Sunday I slept all day, in between my partner bringing me various medicines. Monday was much the same, except that my partner drove us home and took me to the doctor. It felt like strep but the test was negative and the doc assured us it was a virus going around, his wife had had it, the next phase would involve copious amounts of congestion. Thus encouraged (not encouraged at all) I went home to sleep some more.

Tuesday, Wednesday, and Thursday of that second week, I got up and went to work and worked hard and accomplished a whole lot, every day. I’d missed 4 of 5 days last week and I had so much to do, and I was determined to do it. I basically decided to pretend I wasn’t sick, and just plow through it. Kleenex, Sudafed, and these special throat-numbing cough drops were my constant allies. Plus ibuprofen and Tylenol for the headaches and body aches. I thought of the days that I’d languished in bed with only my heart hurting, blissfully unaware of the physical pain on its way to join the party.

And then, after 3 of 5 days of work for the week, making 4 of 10 days worked in the last two weeks, Friday morning I woke up with my left eye glued shut. Google confirmed that I had most of the top 10 signs of an eye infection, and when I spoke to my doctor’s nurse on the phone, she agreed. She didn’t even make me come in for another appointment, she just called in the perscription eye drops. Ah, pink eye. How the heck had I gotten that? All I could figure was that my immune system was already down from fighting the virus.

So I didn’t work Friday, and I didn’t work Saturday. I had my writer’s group by Skype chat (a novelty, but I don’t recommend it over in-person), and I missed out on the big get together happening Saturday night (with “everyone but me”). Instead I’m here, writing to you, but I’m glad I got the chance.

So that’s the story of how I worked less than 1 week in 2 weeks and managed to falter through all the various obstacles of living. The story of how I lost a friend and attended only 1 show at a 3-day music festival. I have lost count of the boxes of Kleenex and the number of cough drops consumed. And any time the universe wants to slow it down some and get back to my regularly scheduled program of feeling pretty okay, I’d be fine with that.

Thanks for listening.
Jobe 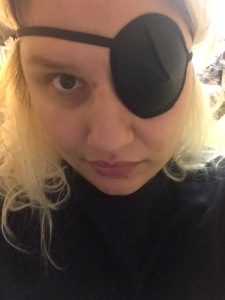